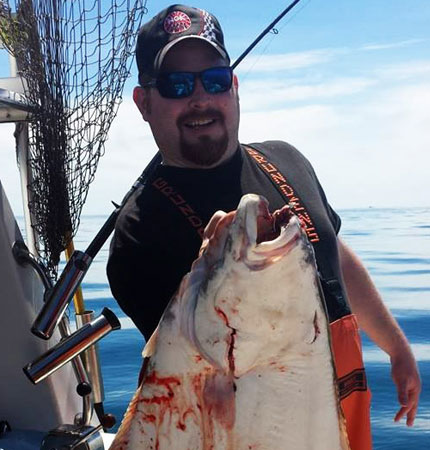 Mark grew up in Western Washington, where he spent many hours fishing for trout in Eastern Washington, fishing for salmon in Puget Sound, and hunting waterfowl on both side of the Cascade Mountains. While in college, he spent time learning the hunting and fishing opportunities in the Skagit and Nooksack River deltas.

After college the lure of the racing business (supplier to Formula 1, Champ Car, NASCAR, etc.) in Southern California took him away from Washington, he was exposed to the warm water ocean fisheries off Newport and San Diego. A few years later, the visit to California ended and a new adventure began as his career took him to Portland, OR. He quickly got back into waterfowl hunting and became exposed him to the many fishing opportunities available between the Columbia River, Willamette River, and several ports on the Pacific Ocean.

Mark soon purchased his first boat and became a regular in Sellwood and Multnomah channel. However, the temptation of the ocean took hold and he soon purchased his next boat, which was much more ocean capable. His boat named Hillbilly Deluxe spends the spring months chasing bottom fish, salmon, halibut, and crab near shore and at Halibut Hill. Once the warm water moves closer to shore in early July, Mark and his boat begin making trips west in search of the abundant Albacore Tuna populations that seasonally visit the Oregon coast. Later in the season you will see Hillbilly Deluxe and its crew on the competitor list for the Oregon Tuna Classic (OTC) series of events.

Balancing his work as the Director of Operations for an energy storage company with being an advocate for Stevens Marine, Mercury Marine, Raymarine and Kingfisher Boats leaves Mark at the coast most weekends during the season with fishable weather. In the off season, you will see him in the duck blind or at many of the industry shows and events between Washington and Oregon. Mark is Owner and Captain of Hillbilly Deluxe Sportfishing.