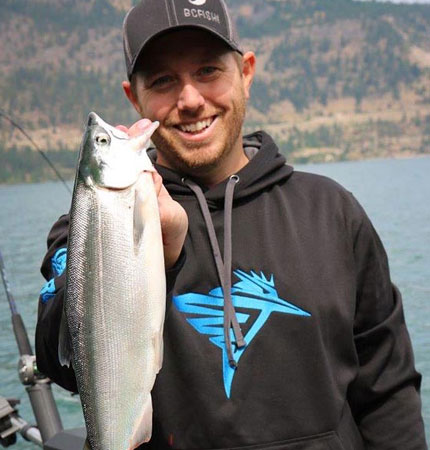 Danny has been an avid angler since his early child hood. Danny grew up in a small quaint community in the Similkameen Valley of Princeton BC. His family’s farm is nestled against the Similkameen River. This is where Danny and his older brother Spencer adopted the passion for fishing.

Danny has lived in all parts of British Columbia which included Cranbrook, Kamloops, Abbotsford, Merritt, Penticton and Kelowna. He is now settled down in West Kelowna with his beautiful wife Marina who shares his passion of fishing.

Danny is very active within multiple fish and wildlife conservation groups within the BC community. He loves to share his love and passion for fishing with others. Sharing his discoveries, adventures and tips on the water with fellow Anglers is just as equal of a passion of his as fishing. Danny encourages all Anglers to share the sport of fishing with the younger generation so they too can have those special moments in life fishing with their fathers, brothers and all loved ones. To learn more about Danny and his team, please visit bcfishn.com.

We use cookies to ensure that we give you the best experience on our website. If you continue to use this site we will assume that you are happy with it.Ok