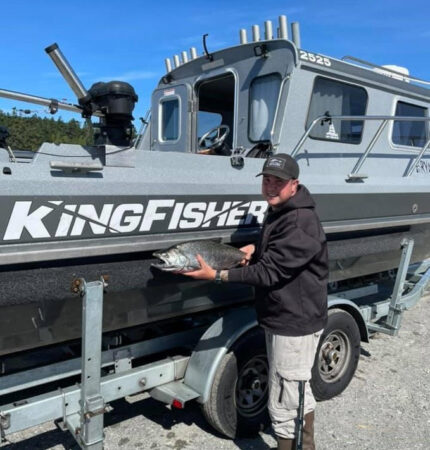 Cory grew up in South Western Washington. He spent many hours fishing for Salmon on the Columbia River, fishing for trout in local creeks, and hunting deer/elk on the western side of the Cascade Mountains. Joined the Navy in 2007 and was stationed on Whidbey Island for 15 years, where his knowledge and passion only grew for the saltwater. He started in Whidbey Island by fishing off the shores of Coupeville, Oak Harbor, and southern San Juan Island and targeting Salmon, halibut, lingcod, shrimp, and Dungeness crab. His first boat was a 20ft Thunderjet that he used regularly. As his passion grew to take his family out on the regular and to continue to fish through rougher weather conditions and still feel safe getting the family home, he decided to upgrade to a new boat. From 2013-18 he put roughly 400 hours on his engines while he and his wife serve active duty billets in the Navy and have two beautiful daughters. Cory deployed in 2017 and, while he was gone on deployment, decided it was finally time to upgrade in boats to go further and do more on the fishing grounds. He chose to go with a kingfisher 2525 offshore, which fit and suited his family and all the creature comforts and had a mean fishing boat that would get him to the grounds he wanted to fish. Upon returning from deployment, he purchased the boat and took it on its maiden voyage out of Neah Bay, Washington. He has gone as far as 60 miles offshore fishing Halibut, Lingcod salmon, and Rockfish. Since 2018 Cory has put 500 hours on his boat and caught a multitude of fish. He has also won multiple Salmon derbies. Cory inspires to guide or own a fishing store post-military but continues to spend hours every weekend to sharpen his skills. He loves his boat and says it was one of the best decisions he could have made. He did it right with his boat and outfitted it for all the things his family loves to do.