The West Coast of Vancouver Island has always remained the ultimate testing ground for one’s boating skills and seamanship.

Sure, you can run the Inside Passage or navigate fast-flowing water rife with whirlpools and treachery. But there is little comparison for boating the wide open Pacific and trolling Albacore tuna!

From September 11-19 the Bamfield Tuna Shootout celebrated it’s 10th Anniversary, proof that time flies and good things last. Tofino Resort and Marina started Race for The Blue three seasons ago. Winter Harbour followed with a tuna derby this season as the tuna scene caught fire. At 10 years strong, Bamfield has remained the undisputed tuna derby champ and a supreme test of boating endurance.

We’ve run KingFisher 3025 Offshores in Bamfield for the past six or seven years and this season were joined by Captain Chris Ceraldi and his 3125 GFX. The safety in numbers and company was a welcomed change. But the KingFisher fleet was far from done there. Two big 3425 KingFishers were also taking part, as well as another 3025 Offshore.

Now there are multiple challenges and logistics in offshore tuna fishing, and this year’s derby was no exception. Competitors were greeted with a short weather window as the derby kicked off. Contestants rallied, traded waypoints and geared up for a big start. Over the years we’ve become veterans of nocturnal travel and offshore overnighters, so the plan was simple: load up on ice and depart Bamfield at midnight!

The 2020 tuna season was plagued by wildfire smoke, resulting in no satellite imagery, chlorophyll or sea surface temperatures. Most boats up and down the WCVI were relying on commercial troll fishery data and the last sunny satellite images before smoke blew up from Washington, Oregon and California.

We set our sights NW of Loudon Canyon, Northwest of Tofino and about 70 miles offshore. We crawled out on autopilot at 8 knots and arrived. Swell and wind were up and conditions less than awesome. The smoke was thick, yellow and almost offshore apocalyptic. We rallied, trolled and hooked eight Albacore that first day…including one pushing 20 pounds. At the same time, the Ceraldi crew aboard Rocky, caught it’s first-ever Albacore and finished with seven.

This first round of tuna got both boats on the board, with Big Coast’s biggest four fish locking the crew of Milne and Jes McFarlen into 3rd.

And then came the 35-40 knot winds and 3-4 metre swell offshore, effectively shutting down the derby for three days. That’s the thing about offshore tuna fishing. You can only take what the good Mother gives you. And no reward is worth the excess risk.

So we chilled in Bamfield, had a few frosty cold ones, and waited out the weather. Three days later on a Wednesday the weather was looking up, albeit still tilting to the gnarly side of scale.

With little data on hand the two KingFishers headed out on an exploratory mission, about 85 miles NW of Tofino. No other derby boats ventured out that day. The residual swell and wind was still fearsome and we battled 3 metre blowing 20 conditions. Luckily we found some decent fish and good numbers…dropping another 10 Albacore on board. The Ceraldi boat was hitting fish early while McFarlen and I struggled. Then we hit it hard with 10 Albacore in about 45 minutes. It was complete chaos on autopilot in crazy conditions, but we boated all the fish and got the hell out of there!

Back in Bammer with numbers and a plan on hand, we again iced up both boats and geared up for a big push. The forecast the next two days was headed winds light and 1 metre swell…about as good as it gets in September off WCVI.

The plan was simple and involved an offshore overnight, another Big Coast tuna specialty. We left early on Thursday morning headed straight back to our marks about 110 miles NW of Bamfield. Both boats packed a whack of extra fuel to ensure getting home. We also utilized a thermal cam, AIS and radar to ensure safety.

The tuna frenzy that unfolded the next two days was incredible, with the 3025 tubbing out on 40 tuna Day 1 and the 3125 following suit the next morning with a total of 60. Neither boat could hold another tuna. We were cumulatively stuffed and made the 31/2 run home.

Over the years we’ve finished second and third a couple times, but can’t win the Shootout! Only your four biggest fish count towards total and we’ve fallen short in finding the biggest grade. So it was nothing new when we dropped out of medal contention. What we did win…was an entire offseason of eating tuna. Not to mention, the Rocky crew delivered us Ribeye steaks, garlic bread and wine almost 100 miles offshore…which was super cool and saved us cracking our cans of Chunky Beef Stew!

After 10 years, Bamfield and offshore tuna fishing remain the ultimate testing ground of boat captains and anglers alike. With nine days of gruelling competition, the Shootout tests one’s skills, endurance and savvy. Not to mention the KingFisher Boats.

It was awesome to see five big Kings in Bamfield and we look forward to welcoming more in years to come. There is no better place to learn tuna and offshore with a great support network and safety in mind! 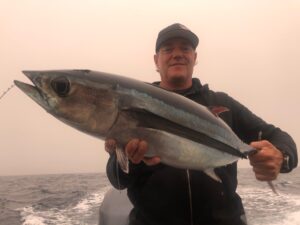 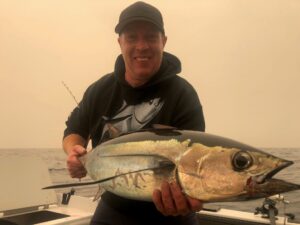